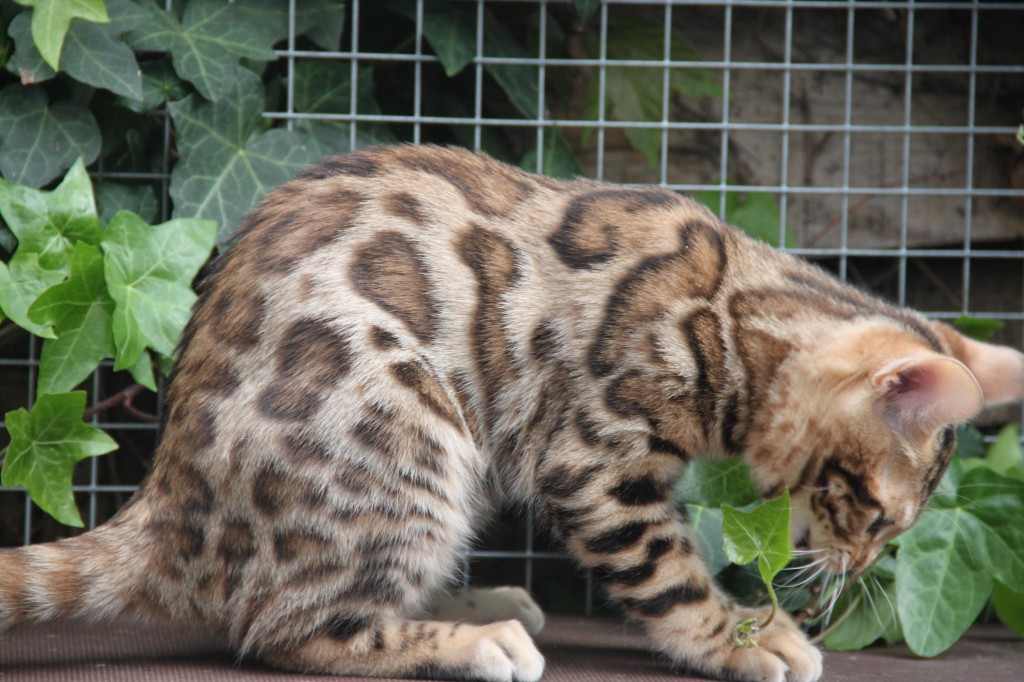 The Bengal: A Bewitching Beauty

Quite a few cat breeds boast a wild feline look: Norwegian Forest cats resemble huge arctic feline predators; Pixie Bob cats look a lot like American Bobcats; Abyssinian cats wear the wild agouti coat pattern with pride. In fact, one of the reasons we love cats so much is the distinct uncultivated touch in their appearance and character.

However, not many breeds possess a documented wild heritage like the Bengal does. The Bengal cat is a beautiful cat that is a cross between a domestic cat and the Asian leopard cat. It has beautiful markings that are similar to those of the wild Asian leopard, with stripes and other marks adding to their appearance. In terms of size, the Bengal cat is similar in size to a domestic cat and they range from 7 to 10 pounds for females and 9 and 12 pounds for males. Males may grow to reach close to 20 pounds. The markings on the Bengal cat vary based on body part. The face has horizontal stripes that almost make it look like the cat is wearing mascara. The sides of the body have spots similar to those of a leopard or jaguar. The back of the body has symmetrical stripes. They have two distinct coat patterns, either marble or spotted.  Unlike any other breed, some Bengals appear as if they were dipped in gold or silver glitter. Its distinctive leopard spotted or marbled coat enhances its wild appearance as it roams the house.

Brief History – As the story goes, Jean Sugden Mills, around 1982 bred a domestic cat with a feral Indian Mau. At about the same time, Greg and Elizabeth Kent started their own breed of Bengal Cats using an Egyptian Mau. Both Jean Mills the Kents worked hard to popularize the breed, and in 1986, The International Cat Association adopted the first written breed standard. Today Bengal Cats are the most popular registered cat breed. Bengal breeders and breeding programs now outnumber most other breeds. 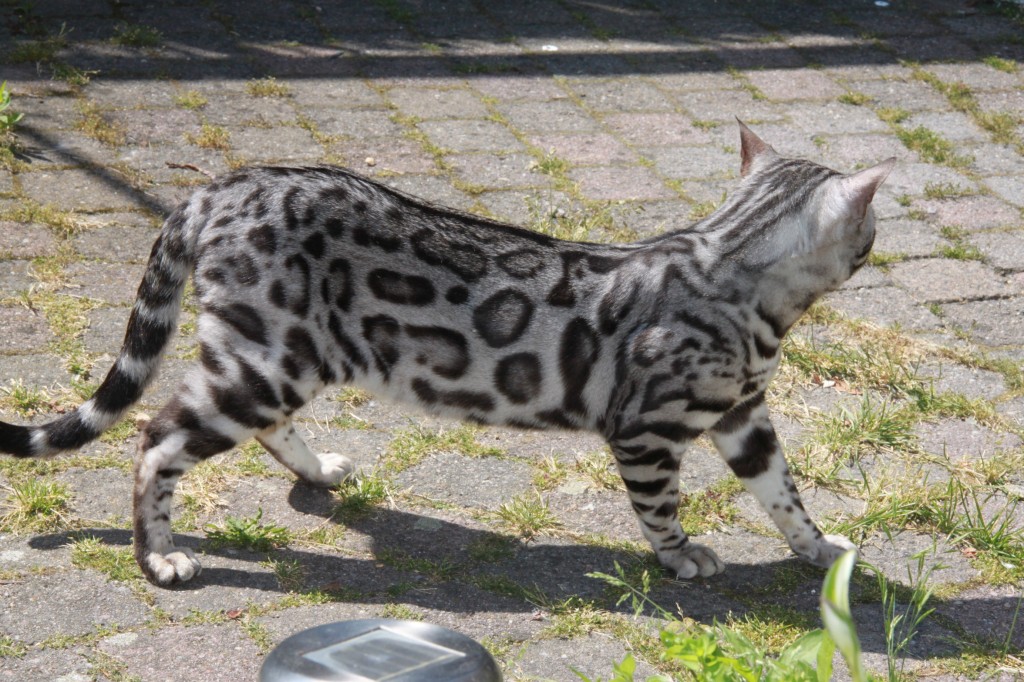 Not just for everyone..

Bengal cats are smart and cunning animals that crave attention and are always exploring.  These cats aren’t recommended for casual pet owners, as they can be a handful, but you can rest assured that life with one will never be boring.

So what made the Bengal such an instant hit in the cat fanciers’ world?

The Bengal has a smooth rich coat that does not require any out of the ordinary grooming rituals. Some brushing is always recommended, for bonding purposes if nothing else, but the coat remains bright and beautiful even without that additional care. The coat has a distinct “undomesticated” appearance, courtesy of the Bengal’s wild heritage, and some cats are said to have an actual golden glitter over their coat.

2. Variety of Coat Patterns and Colors

Bengals always display the tabby markings pattern, but that does not mean a uniform look. Bengal cats come in various shades of brown, with various yellowish and reddish tinges. There are even white “snow” Bengals that support a light silvery tabby pattern (some of them even have blue eyes). With their tabby patterns ranging between blotched (marble) and spots, the most spectacular Bengal cats present the viewer with a display of leopard-like rosettes. The rosettes, the joy and pride of many a breeder, can be anything from a largish bi-color spot, to a fully developed and clearly marked rosette. Some Bengals also inherit something called the “glitter gene,” which gives their coats a bright, iridescent look. It is difficult to capture in pictures, but a Bengal with this gene will appear to sparkle in sunlight. These cats have a series of horizontal stripes on their faces, known as mascara, which extend along the eye to the back of the neck. Their back and sides are marked with spots like those of a jaguar, and the rest of the body, legs and tail, are marked with symmetrical stripes. The spots sometimes have a marbled appearance and are generally made up of two colors. The following colors and patterns are recognized as Bengal Cats and therefore eligible for competition; Brown Spotted Tabby, Brown Marbled Tabby, Seal Mink Spotted Tabby, Seal Mink Marbled Tabby, Seal Sepia Spotted Tabby, Seal Sepia Marbled Tabby, Seal Spotted Lynx Point, and Seal Marbled Lynx Point. Also silver, blue and the rare melanistic and charcoal are common colors in the breed.

The personality of the Bengal cat is what makes it such a great pet for animal lovers. Ultimately, cat lovers seek out the companionship of a feline, and not just good looks. And this is where the Bengal cat truly stands out, creating a huge appeal to ailurophiles everywhere. They are anything but ferocious or feral: Bengal cats today, adopted into loving homes, have to be at least four generations removed from their wild ancestors. These kitties are sweet and loving, yet incredibly agile, intelligent and active. They may come and nuzzle your face in the middle of the night, purring softly or spend hours pleasing themselves by stretching frequently or rolling on their backs in pure, uninhibited rapture. These curious felines tend to explore their surroundings and seek out human interaction at all times. Many typical cats are very aloof and tend to ignore their owners unless there is food to be had. The Bengal cat is more personable and is able to become a part of the family.

Part of the Bengal personality is its extraordinary ability to critically think. The Bengal can figure out things and actually try to get it done on its own. The Bengal cat is a breed whose personality enables it to easily absorb information. With this, you can teach your Bengal different tricks to show everyone how smart your cat is. This aspect of the Bengal cat personality has earned the breed distinguishing labels like “dog-like cat” or “dog-cat”. New owners of Bengals are often amused at this cat’s voice – the sounds they make are distinct and versatile, ranging from a coo to a chirp.

As the immediate source of care and security, you are the cat’s parent. This being a given, you and your Bengal cat get to bond a lot deeper. This cat is so attached to you that a major part of its personality is to be with you at all times. “Talking” is inherent to the Bengal cat personality. Somehow, you understand each other even if you don’t really speak each others language. The Bengal expresses itself vocally, which is another very intriguing aspect of its personality. It is the intimate connection that the two of you have that enables this verbal communication. These cats tend to be really picky about their litter boxes and can have less than desirable toilet habits if their litter boxes aren’t changed often enough or if the litter is not the sand type that they tend to prefer. Did you know… Bengals are one of the few breeds that are fond of water! Some play quite contently in deep water and some even like to go swimming! They also love to take baths! Forget the adage that kitties don’t like to get wet. The Bengal is an exception – many Bengals enjoy playing in water. Be careful if you keep an aquarium as your fish may have some unwelcome company. You might have a companion in the tub. Bengals have several attributes found more often in canines than felines. They like to play fetch, and if you want to take your indoor Bengal outside try walking him on a leash.